Google is Rolling Out a Big Core Algorithm Update

Changes to the core of Google’s algorithms are relatively rare: Google makes them only a few times a year. The last few days have been that time again and the Google results have been stirred around quite a bit.

We started to write about a possible Update over the weekend and, on Monday evening, Danny Sullivan gave the official Google announcement that they were makeing substantial changes to their “core algorithm”: 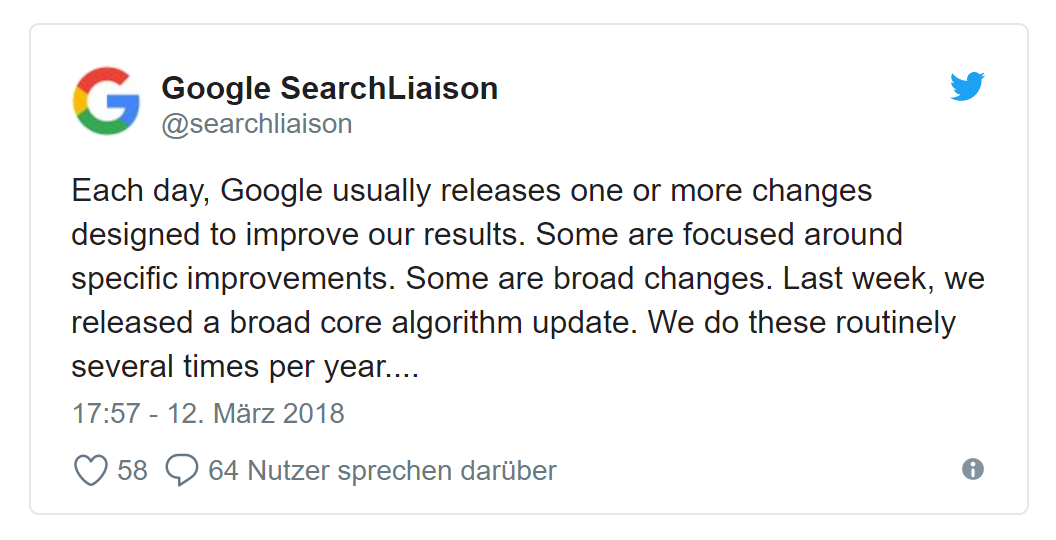 In this blogpost, I want to give you a first impression of the impact this update is making and show a few examples of winners and losers. The update is currently still being rolled out and we will update this article with new information, in the days to come, once they become available.

What is a Core Algorithm Update?

Most of the changes to the Google rankings are flowing and have a rather low impact: Google makes lots of small changes, indexes new content and continuously evaluates data anew.

A core algorithm update really stands out of this Google-Everflux: when Google makes extensive changes to the core of their Google algorithm you will see effects on many different websites, which, in turn, affects the entire SEO profession. This is exactly what is happening since the weekend.

Sadly, Google is (still?) not communicating which goals they want to achieve with this update, as they used to do with the Panda and Penguin filters, for example. That we are seeing a big update has already been confirmed on Twitter by Danny Sullivan.

How do I notice affected Domains?

The first and ovious question after such an update is usually: did my domain get hit? For this case, we can already see a rather characteristic curve within the Visibility Index for affected domains.

This can be a good indicator if changes can be attributed to this update or if the deferrals are due to a different cause. Please keep in mind though that the roll-out is currently still going on and we expect to have more data on Friday. A nice example, which is already apparent, is Education.com:

Who Won in this Update?

While both Penguin and Panda filters saw little to no winners – which makes sense as Google tried to fight specific problems with them – we see a whole range of distinct profiteers from this core update.

It is still interesting, however, that the winners do not show as marked improvements as the losers show declines: nearly the entire Top-100 of losers, by Visibiltiy Index, have lost double-digit visibilty. On the winner side we only have about the Top-10 with double-digit visibility improvements. Here we have an exemplary selection for both absolute visibility and percentages:

While there are no clear cut markers, at first sight, on the domains that this update has a (positive) effect on, there are a number of very exciting similarities:

Many of the domain have once before reacted to one of the “Unknown–Updates“, in the past.

We also see that most of the domain are rather content heavy projects, with numerous news portals on the winning side, such as the BBC, the Telegraph and Daily Motion.

Who Lost in this Update?

Where we see winners, naturally there must also be those who lost visibility on Google: each ranking can only go to one recicient. The next table shows you a exemplary overview of domains, which lost a comparatively large amount of Visibility Index points:

Just as on the flipside, we see numerous domains on this list that reacted to a “Unknown-Update” in the past and are now affected, once again. It stands to reason that this is a good indicator that it is the same kind of update. It is also (or especially?) true because Google will not give a thorough explanation of what the update does.

It is rather unusual that the update is taking numerous days to fully roll out: for pretty much all domains, we still see the update going strong:

Even days after the update, the exact causes are not clear. Google has gone on the record that there was an update, but they did not publish any useful information on what exactly they changed. There are some potential causes, at least, that we are very sure are not part of the mix:

It is very likely that this update is not caused by the long announced change to the mobile first index. There are too many examples of winning domains that are lacking a mobile optimized website.

Backlinks are not a factor between the winners and losers, either.

What is interesting, however, is that many domains that reacted to this update, have also been part of the winners or losers with other “Unknown” updates, in recent month and years. Something that shows up noticeably at numerous dictionaries.

The most probable explanation, for me, is therefore that Google set their next iteration/level of machine learning algorithm free upon the word. This would explain why there are no clear coherencies between the individual, possible causes.

Johannes Beus
(Author)
14.03.2018
Related posts
New approaches to competitive analysis: How researchers at University in Frankfurt use SISTRIX data
Researchers at Goethe University in Frankfurt are developing new data-driven approaches to competitive analysis using data...
Maximilian Matthe
13. April 2021
Head-down organic link building
There are many ways to build links but this example shows one of the most natural ways to achieve it, through new, original...
Steve Paine
23. March 2021
Core Update Light – Google update without official confirmation
In recent years, Google has reliably announced the rollout of new Core Updates. We are currently seeing movements in the...
Johannes Beus
17. March 2021
Comments

Thanks so much for this excellent body of research, Johannes.

After looking over your results, and forgive us if we’re misinterpreting your findings, it looks like domains with rich, authoritative video content were rewarded in this update.

Might this be an indicator that Google is beginning to turn a more favorable eye to brands who are supplementing their traditional written content with video?

Great stuff as always from you guys!

thank you for the kind words.

The huge jump for Youtube alone looks like a good indicator that video had something to do with this core update, yes. The problem comes with the “rich, authoritative video content”. It is hard to say how much of the video content on Youtube is really both rich and (or even) authoritative.

But, again, I do agree, it is a strong indicator that video might actually play a larger role in rankings from now on. Especially as, this time around, other video platforms also gained in visibility.

Which also makes sense if we consider our survey (https://www.sistrix.com/blog/stepping-out-of-the-seo-bubble/#Day_5_Which_Google_products_do_you_use_regularly) we did at the end of last year. Which showed that Youtube (video content) has already overtaken the regular websearch for 18-24 year olds.

[…] update” last week, which has impacted several domains across the SERPs. According to the Sistrix blog, the big winners were YouTube and DailyMotion, while the losers were Etsy and Wikipedia, […]

You mentioned that you’d have more information on the google updated this Friday. Is this post going to be updated with that info or will be a new post? TIA

Thanks for this wonderful research on gain and loss side.

Though people predict that this is something on the video side but I think it might be also on the high authority content side as well. As these video sites have lot of authority content which gets published on daily basis with so many active users who enrich the content with their engagement like reviews, ratings, likes, dislikes.

Google likes keeps SEOs on their toes. Thanks for sharing this awesome research. Youtube has tons of low quality content and i am not sure how is it better from wikipedia.

My website also lost 20-30% organic visitors since last week. Any suggestion to get back the previous position.

[…] this update, reverberations are being felt across the market with clear winners and losers. Sistrix, in its study has highlighted that losers have been impacted at higher magnitudes than winners, with double-digit […]

What do you guys suggest to do first to help regain some of the lost organic ranking?

Thank you for the interesting article, however, it’s not clear what the conclusion is. Please could you clarify what is meant by: What is interesting, however, is that many domains that reacted to this update, have also been part of the winners or losers with other “Unknown” updates, in recent month and years. Something that shows up noticeably at numerous dictionaries’

What does this mean?