Has Pinterest.com been hit by Google’s Interstitials Update?

Juan Gonzalez
I studied Regional Studies of Latin American at the University of Cologne - Germany, majoring in "Business Informatics“. I also studied Business Administration and currently I’m doing a Master in International Business Administration. I feel a fascination with SEO and the people who make it possible.
7 Comments 7
Within the past few weeks, we released our Winners&Losers list for Germany, the United Kingdom and Spain. One domain that stood out for their SEO-success in 2016 was Pinterest.com. We even linked to an interview with Casey Winters, former growth product lead at Pinterest, where he explained how important SEO is for Pinterest and its strategy. Nevertheless, one week after releasing the article, we observed a remarkable drop of Pinterest’s mobile Visibility in Google’s most competitive markets. 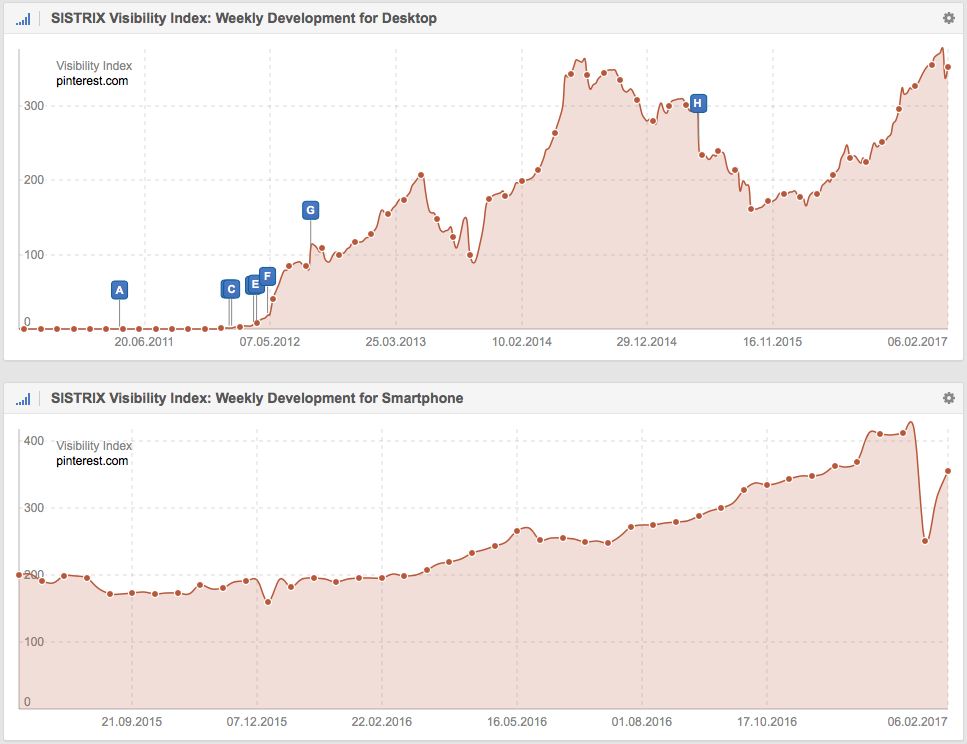 Visibility Index of Pinterest.com for Desktop and Smartphone on Google

In spite of the fast recovery of Pinterest.com, we can clearly see that this domain lost 40% of its smartphone Visibility in the UK, 35% in the USA, 34% in Germany and 34% in Spain. Today, the Visibility is still -16.5%, on average, in all countries where we collect our weekly data.

Smartphone Visibility Drop for Pinterst.com in Germany, the United Kingdom, USA and Spain

To get an idea of the impact of this drop, we could use the data for the UK. In this country Pinterest.com lost 40% of its Visibility on mobile, which makes it a drop of 167 Visibility points. From initially 417 points, down to 214 points. The entire domain Mirror.co.uk only has 165 Visibility points, Linkedin.com has 160 and Independent.co.uk 144, in total.

This Visibility drop happened just a week after Google announced that the Interstitials Update was rolling out, and many of us know very well that Pinterest.com pleasantly uses/used interstitials like this:

Example of Interstitials on Pinterest.com

(2) Here Pinterst.com is showing their APP download above-the-fold. The original content has been inlined beneath the fold:

Example of Interstitials on Pinterest.com

This last kind of interstitial is quite interesting. The user only gets to see this interstitial if they type the URL directly into the browser or if they click on a link to this URL. If the user clicks on the search result for the URL on Google, they get to see an interstitial that Google considers to be OK:

Comparison of Interstitials on Pinterest.com

It’s already been a month since the roll out of Google’s Interstitials Update, but we preferred to wait and see how this new Interstitials Update works and if we could see the same pattern in others domains, which likely have been penalized, too. Many domains that use interstitials and lost mobile Visibility in the same time frame, like Whosampled.com, Instructbales.com or Bose.co.uk, show a similar pattern.

These domains have lost keywords on every page between the first and tenth page of Google’s search results, just as Pinterest.com did. It is important to consider that they are not ranking worse, the Keywords are simply gone:

Ranking distribution with the absolute amount of rankings on the first 10 results pages.

It is quite likely that Interstitials are a good business model, especially for Pinterest.com. This could very well be the reason why they waited until after Google’s update hit them, before they cleaned up. At the same time, Google’s blog post announcing the Interstitials Update was also a kind of invitation to wait and see what will happen:

“The intent of the search query is still a very strong signal, so a page may still rank highly if it has great, relevant content.“

At the end of the day, it seems that interstitials did not work for Pinterest on smartphones. But they must actually work quite well, as Pinterest is keeping them around on Desktop 🙂

Juan Gonzalez
6. December 2018
The Page Speed Ranking Factor. What, exactly, is fast?
Google has very recently started to use the loading speed of websites as a ranking factor for mobile Google Search results....

Hey, well spotted! In France it looks like they were affected too, mainly dropping dozens of positions on brand names.

Personally, I’m glad to see Pinterest get hurt. I am not a fan of their use of interstitials to hide content from non-members.

If I am a member of Pinterest, and I’m putting up things for sale, my potential customers should not have to become members of Pinterest just to be able to see my content. Membership should only be required of those who want to post. This has been the main reason I have not yet started using Pinterest. Why use a site that the vast majority of my potential customers are not allowed to view? Hopefully they will soon be hit for their use on desktops as well.

Really when someone doesn’t understand then its up to other visitors
that they will help, so here it occurs.

Wow. Great insights here. Definitely, nobody is safe with updates. Even the big names.

Interesting Insights. I was looking through this last december when all I saw for most of keywords were pinterest search results over the first page..

Excellent work, I was wondering who would get slapped. I think this is an interesting area where they leveraged SEO for growth, then growth hacked signups with the interstitials (which are terribly annoying) and then got slapped for that. It’ll be interesting to see their next move.

[…] One website that did take a hit is Pinterest.com. This online “catalog of ideas” uses interstitials in a variety of ways, most of which are not intrusive or unpleasant. For example, they sometimes hide content beneath a fold, requiring members to login using an interstitial. Just a week after the update arrived, Pinterest experienced a notable drop in mobile ranking visibility: 35% in the USA (source). […]