How often does Google carry out Algorithm Updates?

Google constantly tries to maintain and increase the quality of their search index. In order to accomplish this goal, Google launches algorithm updates every now and then, on all search markets, worldwide. These so-called Google Updates can have a varying degree of influence on the particular ranking of a website.

How many Algorithm Updates does Google deploy?

According to Matt Cutts, Head of Google’s Webspam Team, there were a total of 665 updates to the Ranking-Algorithm during the year 2012. Spread over 12 months this would mean there were almost two Algorithm Updates per day.

Most of the time, Google does not deploy one update a day, though. Oftentimes, multiple updates are deployed together within one day, followed by days without any updates.

How do I know when a Google Update took place?

Google will not announce all the updates to their Ranking Algorithm. Merely for updates that are expected to have a big impact on a large variety of websites, does google inform webmasters of these updates publically on the day the update is rolled out. 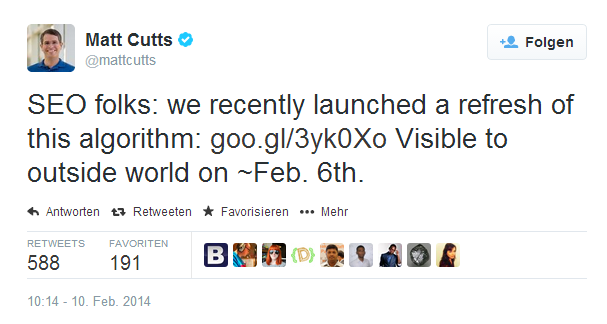 Matt Cutts usually takes to Twitter to announce that a large impact Google Update has been deployed. For the above example, it involved the so-called Page Layout Algorithm.

Using the SISTRIX Visibility Index as a means of monitoring

Using the SISTRIX Visibility Index you are not only able to measure the success of SEO measures, but also analyse the consequences of Google’s Algorithm Updates and manual penalties.

An algorithmic penalty, caused by one or more Google Updates, can easily be recognised in the SISTRIX Toolbox, using the event pins, which are automatically set by the system.

Identifying a manual penalty, on the other hand, which Google might impose due to link building or link-manipulation, for example, will usually show up nicely in the ranking-distribution chart for the domain in the SEO module.

manual penalty visible in the analysis of the ranking-distribution

Obviously this also has implications for the visibility index and is displayed with the chronological course of the domain:

If you have reason to believe that your website is affected by a manual penalty, you should seek out the Google Search Console (formerly Webmaster Tools), since the Webmaster will find information from Google on whether manual measures have to be taken or not.

We have summarized all relevant algorithm updates in a Google update overview.You can type in your own domain for free and have it analyzed easily. You do not need a toolbox account to use this feature!

Video explanation by Matt Cutts on the subject (Engl.)

How can I tell if my site is affected by a particular algorithm?

How can you tell if your site is suffering from an algorithmic penalty, or you are simply being outgunned by better content?

Related posts
What is a ‘good SEO’ result?
Once you have established which metrics you need to track in order to properly monitor your SEO campaigns, you are going...
Overview – SEO Results, and tracking them
Tracking results for SEO campaigns can be one of the most important things you can do. Understanding if what you are doing...
What does the optimal meta-description look like?
Every aspect of your website, from the way it appears on desktop or mobile to the way Google displays it in search engine...