How Nordstrom bested Zappos on Google US

Juan Gonzalez
I studied Regional Studies of Latin American at the University of Cologne - Germany, majoring in "Business Informatics“. I also studied Business Administration and currently I’m doing a Master in International Business Administration. I feel a fascination with SEO and the people who make it possible.
7 Comments 7

Five years ago, in April 2011, Zappos’ market share in Google was more that 3 times as large as Nordstrom‘s – in numbers: 43 visibility points for Zappos vs 13 points for Nordstrom. Today, Nordstrom has twice the market share on Google as Zappos.

During the time from April 2011 to December 2012, Zappos.com managed to increase their market share by 51% (going from a visibility score of 42.9 to 63.42 points), while Nordstrom increased their Visibility 13 points to 54.9. A huge jump in market share by 302%. At this point, they became a direct competitor to Zappos, with both domains having 50% of their keywords in Google in common.

In September 2013, Nordstrom.com unstoppably took off, leaving Zappos.com in the dust. Since then, Nordstrom.com has continuously increased its market share, climbing by 65% from September 2013 until today, with a visibility score of 90.78 points. During the same time, Zappos.com continuously lost market share and ended up at a -37.32% loss, dropping from 63.42 to 39.75 points.

If I see something like the above, I like to quickly compare both domains. You can run such a quick comparison in the Toolbox by simply typing the domains into the search bar, separated by a comma: zappos.com,nordstrom.com

We can see that Links are not a problem for Zappos. They actually have nearly a million and a half links, from about 5,000 domains, more than Nordstrom.

The thing that quickly catches the eye is the large discrepancy in the amount of indexed pages for both domains. Zappos has a whopping 56 million pages indexed and that can be a huge problem.

If we look at the number of keywords for which Zappos has a Top 100 ranking, which are 17,000, and compare it to the number of indexed pages, we get a ratio of 3,310 indexed pages for every keyword in the Top 100. If we compare this number to some other domains, we see how inefficient this is:

Take a look at this:

This huge number of indexed pages is a big problem for Zappos’ crawling- and indexing budget. The real enemies of both the crawling and indexing of large websites are web developers, JavaScript and chaos in general. Let me show you some additional examples:

Zappos has quite a large number of product pages in the Google index which are not available anymore. At the same time, these pages are set to index/follow.

Ironically, they also have popular products, which are available, set to noindex/follow.

All these problems together will cause Google to crawl unnecessary URLs, which will deplete the crawl-budget for the domain. And this crawling power will then be sorely missed, especially for such extensive projects. Additionally, this crawling budget will define how often Googlebot crawls the first few levels of the domain and how often a deep crawl will take place.

We see something similar with the indexing budget: this budget decides on the maximum number of URLs which will be added to the Google index. It is important to keep in mind that only URLs which are crawled regularly will stay within the index.

It all could be so easy. In theory, every piece of content you have should have a unique, logical, easy to understand URL, which stays exactly the same over the next decades.

Sadly, this utopia does not hold up to the real world: web developers decide on creating the third print version of a page, Googlebot learns a bit more JavaScript and suddenly invents completely new URLs and the website gets its third CMS-relaunch in two years, which leaves the original URL-concept in tatters. All of this will end the same way: Google will crawl unnecessary URLs and waste the domain’s crawling budget.

We can see that Nordstrom decided to compete with Zappos on about 50% of their keywords. For quite a while, both domains competed directly at the same level of Visibility. Though, in the end, Zappos’ onpage problems and a change in user behaviour has let to a stark contrast in Visibility for both Domains.

If we look at which keywords both domains rank for, we notice that, in the beginning, Nordstrom only ranked for 23% of the Keywords which Zappos had. Only 3 years later, Nordstrom already managed to rank for 50% of Zappos’ keywords. This change shows us that Nordstrom actually decided to actively work on competing with Zappos. Today the tables have turned and Nordstrom directly competes on 67% of Zappos’ keywords. 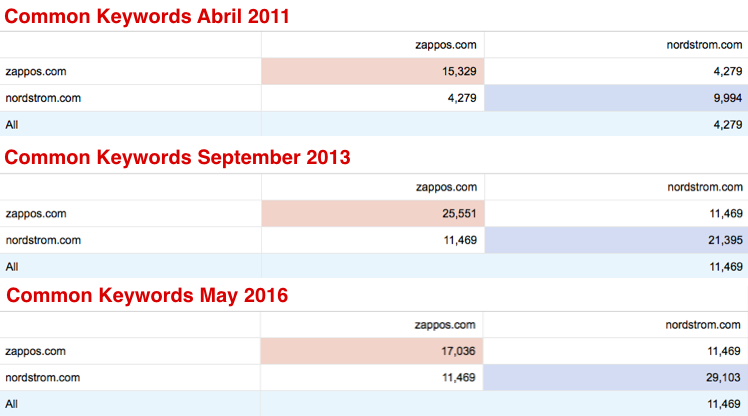 When we talk about the user behavior, we mean that, if the user has a choice between both a result on Nordstrom and Zappos, they will decide to go to Nordstrom.com. We can nicely see this thanks to Google Trends. The user interest for both domains parts ways in Mid 2012, just as direct competition started.

Related posts
UK Top 100 Domains – The most visible Websites on Google.co.uk
SISTRIX has been analysing the visibility of practically all domains with rankings on Google.co.uk, since 2010. This SISTRIX...

Folks that’s a brilliant case study, it seems like Zappos stopped development of their website based a on a number of items you identified. There are a handful of fixes they could do to close part of that gap with Nordstrom but it might be too late….

Thank you very much for your kind words!

They have enough trust and a good brand, actually, they only need a better SEO strategy.

This is amazing post: proof of who is doing good enough and who not. It is not a easy to analyze big site or brand to point out where they went wrong. I have also seen many big brand not doing it right and need analysis. It take time and experience to judge or point out the mistake :). Like your analysis @Juan. Thanks

Did you reach out to Zappos to see their feedback? It seems like a huge oversight on their part, but definitely a win for Nordstrom.

Thank you very much for visiting us!

Yes, I did it. That’s their answer:

Tony appreciates you reaching out. Thank you for bringing this to our attention. I will forward this over to the appropriate teams that handle this, and they will be sure to reach out if they have any questions.

Have a great rest of your day.

Have a nice and successful day!