What is the Google Penguin Update?

Behind the codename “Penguin” hides a decisive update to Google’s ranking-algorithm.

The algorithm change was deployed on April 24, 2012, for all languages worldwide and achieved a noticeable effect.

According to Google, the impact on the search results depended on the country and language of the searchindex. The Penguin Update affected about 3.1% of all English language search requests and German, Chinese and Arabian search requests were affected by about 3%. Some countries have more of a problem with webspam than others, which is why, for the polish searchmarket, for example, 5% of all search queries were affected.

What does Google consider to be webspam?

Google classifies “Webspam” as techniques used by website operators that have the goal of achieving a high position in the search results. Considering that these techniques only have the above goal and do not add any value to users, Google believes that these websites do not deserve the top search spots.

Google forbids the use of webspam techniques such as keyword stuffing, link schemes, or cloaking in their Webmaster Guidelines.

How do you know that a website was hit by the Penguin Update?

If you see a website that has lost a lot of Visibility between April 23 and April 30, 2012, it is highly likely that the website was punished by the Penguin Update. Another indication that a domain felt the algorithm-update is that the website shows a continuous downward trend in their Visibility, for weeks or month, going towards 0.

This loss in Visibility comes about by the loss of all the top rankings for the domain.

Which Goal is the Penguin Update supposed to achieve?

The Penguin Update is another step towards quality, or rather more quality, in the search results as well as during the websites (and content) creation phase.

This algorithm update will punishes websites that do not follow the technical/qualitative specifications of the Google Webmaster Guidelines.

The Penguin Update in Google’s own words

Sites affected by this change might not be easily recognizable as spamming without deep analysis or expertise, but the common thread is that these sites are doing much more than white hat SEO; we believe they are engaging in webspam tactics to manipulate search engine rankings.

Get to know the Google Webmaster Guidelines more deeply. Then, check your project with this new knowledge and, if necessary, change it accordingly.

If you think that a/your website has been wrongly affected and marked as “webspam” by the Penguin Update, you can appeal the decision by using this form supplied by Google: 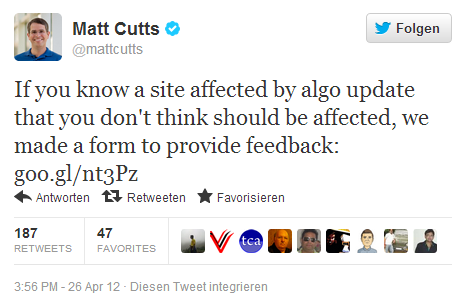 Additional information on this topic: