Free trial
Home Blog What is this little thing we call the Visibility Index?

What is this little thing we call the Visibility Index?

On Friday 11th October, Martin MacDonald wrote a Tweet that caught my attention. It’s difficult to deliver a detailed response on Twitter so, given that this covers an important topic, I chose to write an article using facts and examples to show what the SISTRIX Visibility Index is measuring, why it’s not estimating traffic levels and, importantly, how you can learn from it.


First and Foremost: The Difference between Traffic and Visibility Index

The only tools that are able to measure traffic with accuracy are logfile analysers and on-site analytics solutions such as Adobe Analytics, Google Analytics or Matomo (formerly Piwik) to name a few of the most well known.

All other traffic value tools show estimates which are not from the website itself. They present a level of accuracy which is simply not possible.

Inaccurate data is the reason why you won’t get reliable feedback on the success of SEO activities, not to mention all the factors that could affect traffic on a daily basis such as weather, seasonality and bought traffic. Traffic is a poor measurement of SEO performance.

Let’s use an example as a demonstration of the problem that an SEO can have with traffic data. Assume you are the SEO of christmastreeworld.co.uk. I’m pretty sure that your own traffic data would be comparable to that shown on SimilarWeb.

What we at SISTRIX do is different. We measure rankings on Google. Now, let’s take a look at the Visibility Index for the same period of time.

Independent of the traffic levels, you can see from the graph that the domain is ranking, year-round. In this case, the domain is ranking for over 1,500 christmas-tree related keywords on Google. You are already visible, even in midsummer. That is Search Engine Optimization. According to Google Trends the traffic will start increasing in October at which point your customer will see the shared trend.

The Shared Trend between Visibility Index and Traffic

In 10 years we have accumulated many, many examples of these trends but I would like to summarise and share with you 3 of the most remarkable cases of the past 3 years.

It was on Friday the 9th July, 2017, when we reported that AboutYou, a successful, €320 million company, lost 30% visibility. Pascal Landau, Head of Marketing Technology and SEO at AboutYou told us that we messed up his weekend with our data! Looking at his internal analytics data he noticed a large loss in sessions for the homepage (-15,2%) and the categories (-18,7%), among others, which he said matches our data. He and his team quickly fixed the bug and their success story continues:

On 1st April, 2018, an honest and respected SEO, who will remain unnamed, was detailing his new project to a 300-person audience. Playing with open cards, he presented not only the site traffic but the corresponding Visibility Index chart to explain his SEO strategy. At this time, the website was generating 15,000 organic visitors monthly, today, we are talking about 15,000 daily!

The project is health related which also shows us that domain age is completely unrelated to the Medic Update. The most remarkable thing, however, is that it started without any sort of link strategy.

Simply put, If the number of keyword rankings for a website increases and, at the same time, you are ranking well for those keywords, the organic traffic increases too.

In November 2018 the owner of the website, blutwert.net, published an article about the growth during the first year of work. Included in the update was an important graphic that show’s the traffic and the Sistrix Visibility Index chart for the same period. The correlation between Visibility Index and traffic is easy to see. 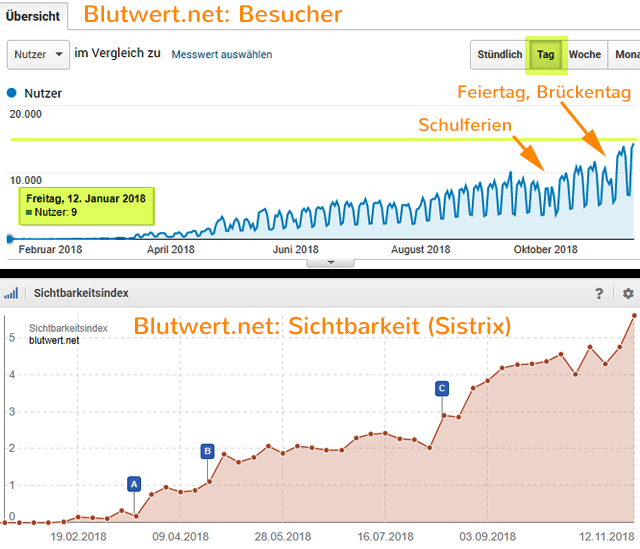 In late 2014, Paul Ingraham was looking for advice (a long story that we’ll save for another article.) He had migrated his domain SaveYourself.ca to PanScience.com and traffic levels were changing wildly. A “domain move disaster” he called it. The reasons for the changes are not important here but take a look at the analytics graph that Paul published and our Visibility Index for the same period. For domains without seasonality, the organic traffic and the SISTRIX Visibility Index show a very close match:

What else can you learn from the Visibility Index?

– The visibility index is useful for showing us that it’s a bad idea to build a paywall when your content is not unique. Instead, change your plan and hire an SEO.

– If this football club wants to hire you as their new SEO because they lost traffic and you don’t have historical data from the domain, our Visibility Index will give you the historical insights you need, e.g. When someone forgets to delete the disallow in robots.txt.

…or, to demonstrate SEOs that Google really doesn’t care about directories or subdomains and that both can work well. The proof is there, either way!

– You can also drill into the visibility for hosts, folders and even URLs of any domain. I found an individual URL in Google US which is 7 times more visible than the official website of Universal Studios:

But the best story is that of this single URL which is 187 times more visible on Google than the most expensive domain ever bought. QuinStreet Inc. paid $49,700,000 for CarInsurance.com. A domain with content quality problems in its history:

That’s not all! QuinStreet Inc had a $100.000.000 budget, so they bought Insurance.com too for $35,600,00 (including content). It took them more than 4 years to realize that the domain was being filtered by the first Penguin Update:

– In April 2013, at the time when important Android phones with Google Play were being launched, Google was put under pressure. ITunes had vanished from the SERPs. Google’s statement reinforced the suspicion that they had suppressed Apple’s domain. “We’ve been having some issues fetching pages from the iTunes web servers“ it said in a Tweet. It turned out that the iTunes website was actually blocking crawlers.

The whole discussion could have been saved if someone had been paying attention to the visibility which only occurred on one subdomain.

– The Visibility Index chart allows you to discover that your hreflang configuration doesn’t work and Google is flipping your domains, because they are confused about which domain to show in the USA.

– The visibility index makes clear that cloaking is a very bad idea and that Google reacts faster than you think:

– It can also show you that IP-based geotargeting doesn’t work because Google crawls from the US. And that Cloaking and IP geotargeting combined could never work together:

– The Visibility Index can help you discover event-related SERPs changes. Imagine you have a website related to rugby that you are monetising well because you have been ranking for keywords like “england rugby fixtures”, “rugby calendar” and  “rugby matches” for the last 3 years. Suddenly you have been de-ranked on Google, you lose traffic and you begin to worry.

In this case It’s not a technical issue and it’s not a Google Update or, worse still, a manual action or a quality problem. Keep calm and carry on because it’s just Google de-ranking your website temporarily while ranking the official one. The Rugby World Cup takes place every 4 years and you can clearly see it ranking well during the world cup event in the graph below.

– The Visibility Index allows you to explain to Amazon at Amazon that the company they bought for $1.2 billion urgently needs a better SEO-strategy :

– By understanding the visibility Index you are even able to recognise when a domain has been hit by a Manual Link Penalty:

– Your product has to work well in real life too otherwise it won’t work on Google. An SEO strategy does not help in this case where you simply need a product that matches real customers needs:


– When was the last time you used MySpace? Now, try to explain to Microsoft, Ciao is the same quality.

In 2010, Microsoft-owned firm Ciao made an antitrust claim stating that Google was restricting competition to the ‘detriment of European consumers’. On the commission’s 215-page finding against Google we made it clear that we could find no evidence that Google put competitors at a disadvantage. On the contrary, we found that some of the claimants had been violating Webmaster Guidelines.

You should create products that matter before accusing Google. In the same period of time, Amazon managed to rank more Keywords on Google’s first page results than Google itself:

Google has been making it clear, for years, that they do not want to have search-results from competitors within their index, like both of the above-mentioned domains were doing.

More examples of Search Engines trying to rank their SERPs on Google’s SERPs?

As we explained before: Organic traffic is the result of carefully considered SEO work.

This response, longer than 280 characters, has been very detailed but I hope it proves why our data is valuable to SEOs. We are not perfect but I can guarantee that we go to work every day to deliver SEOs the best data that they can find.

Since we invented the Visibility Index 10 years ago our mission has been to make Google Rankings transparent and easy to understand to everyone and this is not going to change. I invite you, Martin, to join us for the next 10 years and help us with our mission to make Google search transparent. You’ll discover that we are more than a SEO-Tool and then maybe your next Tweet will looks like Paul’s.

I hope you enjoyed the post Martin, and anyone else reading!

Juan Gonzalez
(Author)
18.10.2018
Related posts
Links: Clicks and Position Irrelevant for Google
Links and the resulting incoming recommendation are still one of the most important ranking factors on Google. In the last...

Johannes Beus
29. September 2021
Core Web Vitals is a Measurable Ranking Factor
Google’s Page Experience Update, that started its rollout in June, is now complete. After two and a half months the...

Johannes Beus
16. September 2021
Chrome Continuous Search shows competitors above your website
Up until now, the separation has been clear – if a visitor clicks on a SERP result, they end up on a web page and only...

Johannes Beus
2. September 2021
Comments
You have to be logged in to write comments.